Augustines were born upon the ashes of Brooklyn rock band Pela. After the death of vocalist Billy McCarthy’s brother, he and Eric Sanderson (bass, keyboards) founded We Are Augustines and released Rise Ye Sunken Ships in 2011. Rise dealt mostly with the loss of McCarthy’s brother and his mother’s schizophrenia which evidently made the record an autobiographical one. The New York band recently dropped the ‘We Are’ from their name and went back to being just Augustines (a name they couldn’t use before for legal reasons) and relocated to Seattle.

When their debut Rise Ye Sunken Ships came out two years ago I had just moved to a different country, started a new job and found a new love. I would listen to their album for hours on end on those long train rides home and went to several of their live shows in different countries. It was my soundtrack of 2012. Evidently, expectations for a follow-up were sky high. After hearing the record and hearing some of the new songs live, my expectations were more than met.

When I first listened to Cruel City, the first single to be released from the new record, it didn’t really stick. The world music influence put me off at first but what made me fall in love with the song after all was the bridge that is an Augustines moment par excellence as McCarthy bursts out vigorously “Hey, I miss your arms / I still reach for you in the dark / Hey, I miss your skin / I still reach for you in the dark.” Cruel City speaks of the alienation one can experience in a big city but also of capitalism and gentrification (Come on now cruel city / With money eyes).

The opening notes of their recent single Nothing To Lose But Your Head immediately reminded me of Headlong Into The Abyss, my favourite from their first record. The song carries an instant sense of longing as McCarthy sings “My mind feels like an empty parking lot / For the unloved and lonesome ones / They sit at a table in my head” before exploding into the powerful chorus. It’s a song that speaks about what Augustines are all about as a band, pursuing the dream like you’ve got nothing to lose. Now You Are Free shows off once more Augustines’ excellent songwriting capabilities as McCarthy sings “What am I running from / Myself and everyone“. The song also exhibits McCarthy’s vocal range as he quickly moves between a high voice and his typical husky voice.

One of the strongest songs on the album, musically and lyrically, is Walkabout. It starts out a a solemn ballad with McCarthy singing in a high voice before it explodes into a a full blown rock anthem. It’s about not being stuck anymore and going out there to pursue ones dreams.

Augustines is a step up from Rise on many levels. With drummer Rob Allen now being a full band member (he toured the first record but wasn’t on it), the drums have become much more essential to the songwriting itself (Cruel City, Kid You’re On Your Own). Keyboards (played by Eric Sanderson) have also become an integral part (Now You Are Free, The Avenue) and the songs as a whole have become more varied through the use of progressive and transitional elements. Particularly Kid You’re On Your Own and Walkabout really build up in the course of their 4 to 5 minutes runtime.

The record is also really well structured as an album: it starts out slowly with the intro and then Cruel City and Nothing To Lose kick in. After that, they slow the pace down a little with the love song Weary Eyes just to speed it up again with Don’t You Look Back. Walkabout and Kid You’re On Your Own are true gems and they are thoroughly placed in the middle of the album before they slow things down once more with another ballad (This Ain’t Me) and the anthemic Now You Are Free. The record ends on a slower note with the piano driven The Avenue and Highway 1 Interlude. The final track, Hold Onto Anything, is another midtempo rock anthem in the likes of New Drink For The Old Drunk from their debut. It features McCarthy’s typical Yeahs, that are so fun to sing back at him during their gigs. Unfortunately, Ballad Of A Patient Man, which they always play live, is not on the album but you can get it as a b-side to Cruel City.

While Rise Ye Sunken Ships was a very personal album dealing mostly with the loss of Billy McCarthy’s brother, Augustines is a record that was written when the band was on the road for almost 2 years in a row. It deals with more general topics such as love and loss, loneliness, hope, and finding oneself. When asked, Billy McCarthy said that Rise was a record they really wrote for themselves while Augustines is a record they wrote for the fans (you can read more about that in our interview). With such a highly acclaimed debut as Augustines have released in 2011, it often happens that a sophomore release cannot live up to the expectations and falls flat. There’s the fine line one needs to walk between more of the same and musical development and Augustines managed to do just that. McCarthy stuck to the type of honest songwriting that made the first record so special and he and his bandmates crafted an album that is already a candidate for the album of the year shortlist. 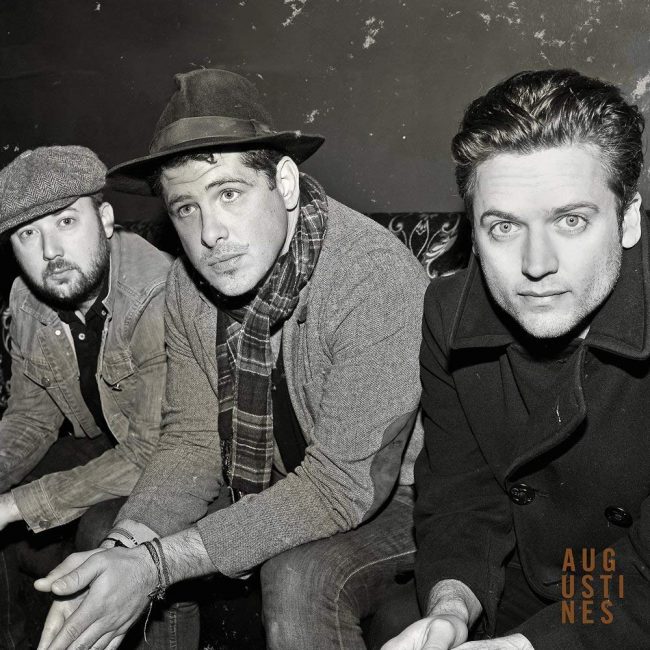