The Stockport based post-pop-disco funk quartet are releasing an outlandish debut album on 16th August. The album is released in perfect timing for the summer festival season and the songs definitely feel as if they were crafted for late nights dancing with those close to you in random fields, or just dancing with anyone you feel like dancing with. The band recorded Hardship Starship in Liverpool’s Parr Street studios alongside the infamous and very talented Chris Taylor (Ian Brown, The Coral, Everything Everything).

The band don’t waste any time to introduce us to their indie and post-punk theme and they even manage to intertwine heavy and pulsing bass lines alongside a jumpy chorus in the first track Extra Terrestrial. Isaac Taylor’s rough and gritty vocals are synonymous with No Hot Ashes’ songs and they feature regularly in this album and this particular song.

We then lurch into the the track CAR where Taylor implements his down-to-earth lyrical style to get across a heartfelt message addressing Britains state and poverty. Taylor also plays on his vocals, he uses his rough and guttural voice to deliver his message in a short and snappy tone. We then continue this look at Britain with Trouble where Taylor looks at crime and violence. The song includes electro elements and a strong disco feeling with dense bass lines, strong vocals and superlunary echoing.

We then meet Salbutamol and Bellyaches two songs which don’t really bring much to the table. The band seem to rely a little too much on Taylor’s voice at this point and Luigi Di Vuono’s riffs don’t do enough to bring the song a new element and take it away from the rest of the album. The rhythm section of Jack Walsh on bass and Matthew Buckley on drums remain tight but don’t have any stand out sounds.

We keep going as we enter Motion Sick, another regular No Hot Ashes track. However, the song is strife with compelling lyrics and it feels like it could be a letter that one may write to their mother if ,per say, they were on a long journey through space. A pick of the lyrics would be ‘buttered bread and bistro gravy’ which is a real throwback to Sunday dinners in their youth and brings a nice personal touch to the record.

Isaac Taylor’s insight into his opinions on British politics continue with Indecision/Intermission. This is another tune in which Taylor alters his vocals and gives us a look at the controversial subject of Brexit with good old David Cameron making a little guest appearance. We are then introduced into ISH-KA with a slower, softer, electronic beat. Like a few other tracks on the album Taylor’s vocals go down the route of almost spoken-word and his rough tones allow him to carry this off successfully. The track also touches on aspects of Britain as well.

We then find ourselves floating into Paradise/Overdrive which is full of light, calming and soft chords with an overpowering feeling of jazz. Taylor’s witty lyrics fill the chorus with a tale of getting high. The final track of the album is held together by Walsh’s courageous bass line and its paired with Di Vuono’s classic and slightly heavier rock riffs to form Hey Casanova. The song is riddled with electro twists and we also return to Taylor’s rough, gritty and shouted vocals. The chorus is designed specifically to be sung in big crowds and an acoustic section of the song is an interesting addition.

Overall, Hardship Starship is quite good for a young and fairly inexperienced band. The album covers themes from post-pop, alternative indie, classic rock and jazzy disco tunes. Nevertheless, the band appear to rely on Isaac Taylor’s vocals a little too much as their songs can sound very similar in terms of melody and don’t differ that much. Taylor’s look at British politics and Brexit is a good addition but at times it does seem repetitive and quite lacklustre, and for me, lacklustre is the best way to sum it up. The album starts with so much promise in Extra Terrestrial but fails to live up to it as we move on, almost like Brexit itself. 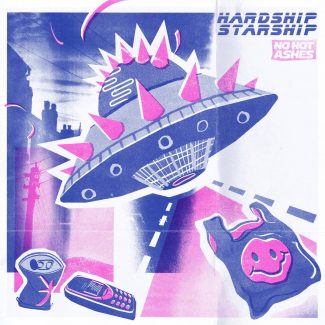