Ahead of their upcoming appearance at SXSW and their European dates, New Desert Blues took some time to answer a few questions about their Devil’s Rope EP, their tour with Cloud Control and many more.

How did you come up with the name “New Desert Blues” and what does it mean?

When we first started recording demos we needed a name for the files so we could easily find them. We just tried to describe the sound of the music and Desert Blues is what we came up with. As time went on and our sound evolved slightly we decided to call all the new songs New Desert Blues, and it just sounded right. So we stuck with it, and here we are.

How would you describe your sound?

Your music sounds quite different from other current UK bands, if I didn’t know any better I would think you were American. What bands/artists do you listen to and whose sound influenced your own?

We do listen to a lot of American music, but we also watch a lot of westerns and cinematic pictures, a huge influence on the bands sound is Ennie Morricone who has scored some of the greatest movies around including ‘Once upon a time in the west’ and ‘The good the bad and the ugly’ starring Clint Eastwood.

How do you write your songs? Do the lyrics or the music come first? Do you work on them collectively or as a band?

The majority of the songs will start off as rough home demos, we will them bring them to our rehearsal space and start to layer up on top of the original skeleton and add our individual personalities as we go. The music will usually come first shortly followed by the lyrics however there isn’t really dedicated formula when it comes to the two.

Your songs tell stories of the American West. How did you come up with this theme and why?

The names are the main character from each track. For the EP we wanted to make songs that were based around short and simple stories. We wanted to imagine the kind of names that you’d find in the gold and oil mining territories of Western America.

All your songs so far have male Christian names for titles, most of them are biblical. Were those names chosen for their religious meaning?

The reason behind the names of the songs are to represent characters of a story – we wanted to created a world within which these stories intertwine and their records serve as concise pieces of musical storytelling.

You have just released your debut EP Devil’s Rope and you have an album in the making. Will the album carry on the themes and concept of the EP or will it be something else entirely?

We already have a handful of songs for the record, I will say for the time being their working titles do stay true to the original theme. This is something we have obviously consciously acted on until now, however there are only so many names we can really continue to work with before it gets a bit silly.

The album will be on a whole new level, we want to shake it up a little. There will be something personal and unique in the titles, powerful and mature. We will all have to wait and see.

You have shared stages with the likes of Cloud Control and Editors. What was that like for you?

We have been lucky enough to go on tour with Cloud Control which was a great experience for a number of reasons, it was our first tour for one we were given the chance to explore beautiful countries and it’s also great to watch a band you respect night after night, it really helps you up your own game, getting tighter, playing harder and they made it very enjoyable for us.

Playing with Editors was a true experience that none of us will be forgetting in a hurry, it was the largest show we have ever played to so far and easily one of the best shows we have played.

What can we expect from your live shows and more importantly, what do you expect from the German crowds?

Like every New Desert Blues show you can expect a lot of energy, dynamics and most importantly passion. We have stories to tell, Characters to introduce to you and the most beautiful landscapes imaginable to show you.

The greatest thing about playing our music live, is connecting with our audience and inviting them to join us.

Last time we performed for German crowds we were all so overwhelmed with how respectful and gracious everyone was to our music and how well received our music was, and for that we will be forever thankful.

Where do you see yourself 5 years from now?

In five years time, we will still be here. We will be making the music that we love now and will continue to love. We will have our record by the end of the year and we expect to continue to grow and grow rising up bills performing our own shows around the world. We will continue to write and release music we are proud of and we will continue to put everything into each note we play, longevity is key. 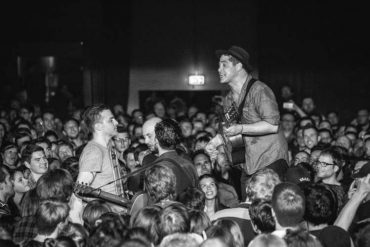