Following on from the praise he received for his debut single ‘Brother’ earlier this year, Chicago native TOMMASO has now returned with his bright and glistening follow-up Better On T.V.

With its light and breezy dream-pop cues, layered between a catchy hook and his own insatiable vocals, Better On T.V. is a truly wonderful and uplifting offering in his solid and growing catalogue so far.

So with his new single available now, we sat down with him to find out more about the single and what he has planned for the future.

Hi Tommaso, how are you today?

Splendid thanks for asking.

The two songs I put out this year so far probably reside in the Lo-fi Rock / Indie Pop territories. Though there’s plenty more where that came from, there are few close cousins in the works from a slightly faster, grungier world as well. I’ve always had a large musical pallet so it’s hard for me to pinpoint exactly what’s inspired me the most but a couple notable bands I listened to growing up include The Beatles, Red Hot Chili Peppers, and The Clash, while some more contemporary artists I really enjoy include Mac Demarco, Anderson .Paak, and Tame Impala. I’m honestly just as inspired by styles and eras of music as well such as the Motown feel of groups like The Temptations, old-school Hip Hop grooves from the J-Dilla era, and tons of rebellious 90’s rock sounds.

You have just released your new single ‘Better On T.V.’. Can you tell us how that track came about?

‘Better On T.V’ was written, recorded, and produced at home in the early and uncertain days of lockdown. I had the bare essentials I needed to record straight into my laptop and seemingly all the time in the world. I had no idea what the song was about until it was practically done but was stoked when the message revealed itself to me. To me, ‘Better On T.V.’ is a commentary on pop-culture and a friendly reminder to not get too caught up in our digital world.

Not particularly. The song itself was written on the piano with no style in mind. I introduced the somewhat retro, synth-based sound when I started recording and blended it with a slightly more contemporary production. I’m a fan of adding modern twists to throwback, vintage sounds.

Can we expect a new EP or even an album from you in the near future?

You know, I think I’m going to stick to singles for a little while longer. Once I have a larger catalogue of songs I like, I’ll throw an album together. A full length LP seems like a big deal to me so I’m going to take my time on that.

You can expect at least one more single, some more videos, and my first round of merch. But hey, I’ll be riding the pandemic out at the studio so new songs and inspiration is imminent.

And finally, what is the strangest thing that has happened to you since you started as a musician?

Oh man, this is a tough one. I guess a story that comes to mind was on Halloween a couple years ago. I was touring with a band called Amoramora and we took a good paying gig at a super small mountain town in Colorado called Ward. Upon arriving, we were approached by a middle-aged man in a onesie that showed us around the venue. I think his name was Chad. Unbeknownst to us, the venue was an old church, apparently one of the oldest in the state. I was wearing a dress and Chad was offering me a cup of his jungle juice inside so the whole situation was very peculiar from the start. If that wasn’t enough, the town was also having their annual homemade chili and jerky contest called “The Chili Jerk Off.” Anyways, the jungle juice ended up being laced with lsd and we played like 3 sets I think and I’m pretty sure the whole town was there. A couple weeks later, I was in Denver having dinner with my girlfriend and her parents and Chad was our waiter!

TOMMASO’s new single Better On T.V. is available to stream and download now. Have a listen to it in the player below. 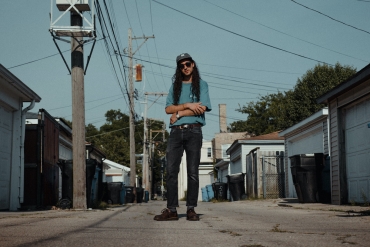