Home > Reviews > The Sherlocks – Under Your Sky

Leading up the release of their debut album, Live For The Moment, many were touting The Sherlocks as a future festival headliner, two years on and their second album see’s the ambition remain although little else has changed.

The Sherlocks are indie poster boys. Born and bred in South Yorkshire they look like cool inbetweeners and you might be mistaken for thinking that a mid-noughties record producer had formed them in order to take advantage of the success of bands such as The Libertines and Kaiser Chiefs were finding in that decade. Audibly they are even more polished than they are visually, and therein lies my internal meltdown about whether I hate or love their second offering.

Opening track, I Want It All plods along just fine before we move into lead single territory of NYC (Sing it Loud); a triumphant sing-along hit and the band doing what they do best. This is followed by singles Waiting and Magic Man, both of which are great songs in their own right.

The rest of the album follows the same formulaic pattern as the first four tracks. There’s nothing to despise about any of the songs, yet there’s nothing to scream from the rooftops about either. I like the album, I listened to it walking to work yet I can’t get past the notion that everything is a bit save on it. I genuinely didn’t notice that my playlist was looped until I was 15 seconds back into NYC (Sing it Loud). It just feels like they’ve found the formula for a great indie-pop song and stuck firmly with that.

Put your headphones in, close your eyes and you could be listening during the 1990’s reign of Britpop, the mid-noughties skinny jeans chart takeover or in a crowd of bum-bag Hawaiian shirt wearing 17-year olds giddy off Lidl’s own brand Dark Fruits. There is nothing offensive about The Sherlocks, they do not challenge musically but is that a reason to dislike an album?

Honestly no. I have no doubt that had they formed 15 years ago they would have adorned the front page of NME and been a top hitter in the Cool List 2004 – 2007. Furthermore, this album does not do justice to how good these songs are live. Watching them at Victorious Festival earlier this summer, their mid-afternoon set drew crowds to rival the more established names of The Futureheads and Ash. Sat high on the castle walls watching over the crowd, you could feel the energy rippling through them. Their noise was big, brash and people danced and sang. It was euphoric, something the album did not make me feel. Despite all of this, I haven’t been able to get Magic Man out of my head for the past three days. 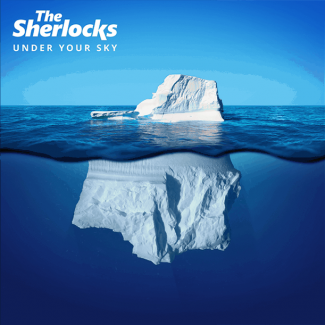 The Sherlocks - Under Your Sky