Aussie rock’s latest ascent has come in the form of Spacey Jane. The Fremantle foursome first released work in 2017 with their EP No Way to Treat an Animal. A warpath has ensued ever since, and all eyes and ears have been on the group’s long-awaited full-length, entitled Sunlight.

Spacey Jane ooze extroverted rock sounds stabilised by introverted, cathartic moods. In that sense, Sunlight is the fitting lockdown album, viscerally urgent yet constantly gazing in the mirror, searching for imperfections, even more fitting considering the band’s involvement in the stay-at-home ‘Isol-aid’ festival.

It rummages through the rants of the mind, almost channelling other Aussie powerhouses like Courtney Barnett and Stella Donnelly. But even when Spacey Jane’s storms of thought start to dampen, they have a projected, furious, hard indie rock performance approach to fall back on.

“One day I’ll be good for you, ‘til then we’re sleeping rough” – Good For You combines the hustle and bustle of the travelling musician life with an inner desire to settle, that bit busier through its dizzying guitar solos. It’s a constantly moving and shifting lifestyle that somehow allows singer/songwriter Caleb Harper to stop and think – the band even makes time for some power balladry on Booster Seat, wet with the unease of maturity, that sees droplets of nostalgia stem.

Is Straightfaced the album’s token love song? Harper is no stranger to jotting down his romantic yearnings, but his lyrics are definitely more interesting when exploring the alternative facets of his mind, rather than the simplicity of heartache. Head Cold is absolutely drunk with thought, and Skin dabbles with insecurity and reinvention.

Despite his heartache running on such simplicity, Harper does manage to execute it with a roaring, reckless abandon. Not all of his vocal performances dazzle, but Trucks sees him at his most wrenching and inconsolable, score one for the band’s trademark urgency.

Spacey Jane find urgency in surprising places, even on less desirous cuts like Good Grief, a radio rock tune that mostly goes with the flow. Their reprimandable wish to appeal like classic Strokes with more expensive production is often overtaken by skilfulness – Love Me Like I Haven’t Changed is comprised not only of tight, sour-faced rock, but wispy harmony vocals that make for one of the album’s sonic highlights.

Greater texture is created on the album’s title track, as guitars don the paradisiacal twang of Aussie wilderness, and even in their brevity, the synths take over on Weightless. Spacey Jane have no qualms when it simply comes to catchy music, Hanging is full of rich melody, and genial songwriting prowess.

Not every hook hits (Wasted on Me), but there’s an affability to Spacey Jane’s sound. It’s a well-toned alt rock force, fit for radio but layered with emotional complexity. Sunlight isn’t the most unusual album you’ll hear this year, but you can’t say it isn’t sincere. 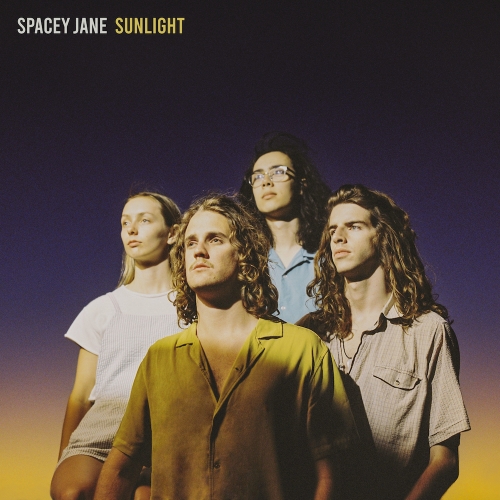