Roosevelt (Marius Lauber) is ready to drop his follow up album Young Romance via Greco-Roman on September 28th, 2018. It was mixed in Los Angeles by Chris Coady (Grizzly Bear, Future Islands.)

The first track, Take Me Back, could easily make it onto the soundtrack of Blade Runner or any cyberpunk movie for that matter. Instantly it reminds you of dark, wet streets that are seen only beside the glow of neon lights. From here, the tracks seem to brighten up like a new dawn.

The single, Under the Sun, is modern synth-pop at its most uplifting, and clean. His sunlit vocals sing “And I can’t hold back this feeling/Am I losing my control/ Let me know if you still mean it/ With your body and your soul.” The lyrics are familiar, like a classic love song, but they’re paired with foot-shuffling disco beats that make it feel contemporary.

Lauber hits brilliant highs in Pangea, as he sings “just remember to fall in love again.” The song carries the spirit of finding new possibility in old love. Better Days gives us a softer side to this album. It’s the kind of song that could fit into any day, easy to consume.

There’s a retro quality to Lauber’s songs that make Young Romance an album that transports listeners to a club in the 80s, where the hair was high, the ties were skinny, and nothing could match the sound of the synth. 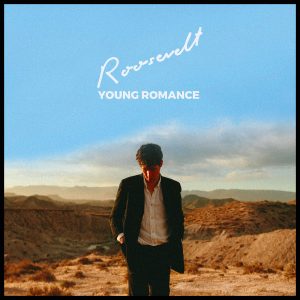