Macclesfield band Racing Glaciers have been regulars on this blog for a couple of years now. After a releasing a bunch of EPs and singles along the way, the quintet finally drop their long awaited debut album Caught In The Strange. We gave the record a few spins to tell you whether or not it’s been worth the long wait.

The album kicks off with atmospheric midtempo track High Love, a song that sets the tone for the next 47 minutes. The Bowie-esque single Seems Like A Good Time follows quickly on its heels marking one of the album standout tracks.

After the album is off to such a great start, it slightly dips in quality. The title track meanders with distorted vocals and the album’s overall pace is held back by recurring (filler) instrumentals (Nag Champa, Hey Man, What’s The Rush?).

Setraline and Carry It On flirt with Racing Glaciers’ folk roots and showcase their ability to compose intricate and sophisticated songs. The recently released eery Patient Man marks another standout track. Samadhi (So Far Away), a state of meditative consciousness in Buddhism and Hinduism, constitutes the albums final highlight with shoegaze guitars and a dazzling crescendo which Racing Glaciers have always been great at (Animal, First Light).

On Caught In The Strange, Racing Glaciers occasionally seem to be caught in their own ambition. The dreamy Naked We Rise, for instance, feels somewhat overblown towards the end. On the 6 1/2 minute runtime closer Young & Unsure, on the other hand, that big crescendo you’d be expecting never quite kicks in.

Despite its flaws, the production and instrumentation on Caught In The Strange – achieved by utilising all the instruments displayed in the above press photo –  are amazing and do Racing Glacier’s vast and cinematic soundscapes justice. The lyrics are mostly poetic and whimsical befitting the overall dark mood of the album.

With a vide array of influences ranging from Bowie, to Radiohead and Arcade Fire, Racing Glaciers create a sound that is very much their own and are a far cry from being your average rock radio band. Caught In The Strange is a remarkable debut from a band that refuses to be pigeonholed.

Caught In The Strange is out on August 5th 2016 through Killing Moon.

Racing Glaciers - Caught In The Strange 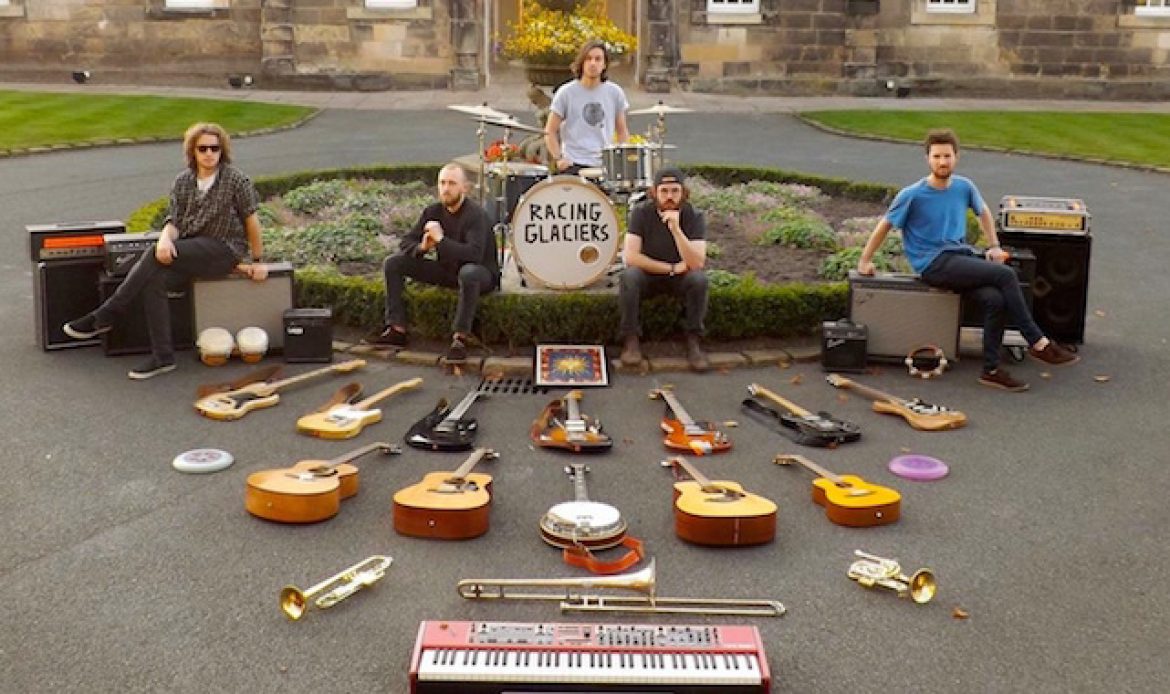