Following 2017’s triumphant Sonderlust, Atlanta-born multi-instrumentalist and founding member of indie rock band Jupiter One Kishi Bashi (aka Kaoru Ishibashi) has just released Omoiyari through Joyful Recordings. While the record remains largely light and lively in tone, exhibiting dexterous guitar playing, luscious use of strings and sweet vocals, his fourth solo album takes a hard look at the racial divisions of the past and the resulting atrocities committed by the American government during the Pacific War.

The title is taken from the Japanese word for increasing compassion for others, a virtue which Kishi feels in sadly lacking and decreasing rapidly in the hostile political climate of today:

I was shocked when I saw white supremacy really starting to show its teeth again recently in America. As a minority I felt very insecure for the first time in my adult life in this country. I think that was the real trigger for this project.

Deeply disturbed by the re-emergence of White Supremacy in America, with prominent members of the Alt-Right being invited into the Whitehouse whilst President Trump refuses to outright denounce Neo Nazis and their accompanying groups, Kishi was reminded of unsettling moments from the past. Following the attack on Pearl Harbour, President Roosevelt hastily created the War Relocation Authority which stripped all US citizens of Japanese descent of all their political and property rights overnight. 120,000 people were rounded up and imprisoned in internment camps setup across Utah, Arizona, Wyoming, Colorado, California and Kansas for the duration of the Pacific War. Fear quickly turned into racial prejudice and subsequently suffering perpetrated by the state, and Kishi worries that the circumstances arising in America are creating the conditions for history to repeat terrible mistakes:

Part of the Omoiyari project is saying that if you’re a minority there’s potentially still a lot to look forward to in this country. I believe there’s a paradigm shift coming, especially for minorities and those who have felt oppression. America is changing. If you’re privileged you need to understand that this country is for everybody, and we have to make that space for all people.

Kishi will release an accompanying documentary which delves further into history and how this relates to Omoiyari next year.

Omoiyari is a masterly crafted album, warm in tone and cinematic in scope throughout. Not least with it’s opening track Penny Rabbit and Summer Bear which sways like playful beams of summer streaming through the branches of a tree and sets an optimistic tone which remains throughout. Other standout tracks include Theme from Jerome (Forgotten Words) on which Kishi  delivers a heart achingly gentle vocal delivery, country inflected Angeline and Violin Tsunami which is one of the more sombre songs yet still brims with defiance.

While we await the documentary to gain more context to each of these songs, Omoiyari is certainly a rewarding listen and joy to play.  Given the weighty political message, it is a great surprise that Kishi Bashi has been able to create quite such a delicately ornate record. Whereas others may have opted for anger or fallen into despair, Omoiyari is an album which proves that truth and beautiful hold an undeniable power which will always outshine hate, ignorance and inequality.

Should we listen and take heed to those who remember the terrible mistakes of the past, embrace compassion rather than act on hatred, then perhaps we can move towards a brighter future. 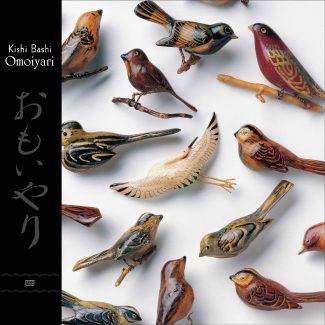