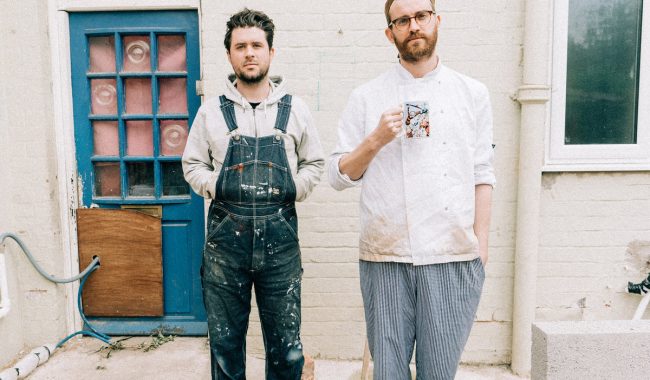 Uncompromising noise punk duo John have been causing quite a stir of late, gathering fans right across the continent after supporting Idles on their Europe tour and grabbing attention in the US after being featured on the KEXP International Clash Day Broadcast. Now, they drop their unrelenting new single Future Thinker.

Literally named after themselves, the Crystal Palace based band is comprised of drummer vocalist John Newton with Johnny Healey on guitar. On their latest offering, their pair outline their bleak vision of the future, and it sounds pretty damn dystopian! Produced by Wayne Adams and recorded at their familiar haunt of Bear Bites Horse Studio in East London, they were joined by special guest Chlöe Herrington (V Ä L V Ē / Chromehoof / Knifeworld) on saxophone.

With the song initially thrashed out from a relatively personal perspective, I became quickly aware of the more collective dilemma of looking for an image of a future. It’s not a surprise that there’s a visible struggle in the present exacerbated by cyclic production and obsolescence. I think that’s why I ﬁnd there’s a beautiful economy in playing music, of course you need the tools of electricity and instruments, but the songs are contained inside you, they help create a shared moment that dissipates after the lights are switched on.

Future Thinker is accompanied by a self-produced video which reflects their minimalist approach to creating their huge walls of abrasion. The track will appear on their upcoming LP Out Here On The Fringes which follows their ferocious debut album God Speed in The National Limit in October.

You can catch them this summer on the festival circuit, making appearances at 2000 Trees at Upcote Farm near Cheltenham and Farmfest in Somerset with more slots expected to be announced soon. Plus, you can see them takeover The Lexington in London on Wednesday 29th of May. Dates and ticket links can be found below.