Otherkin are a four piece from Dublin who have just released their sophomore EP, The New Vice, on June 17th. Drawing influences from The Clash, Blur and The Ramones, the EP was mixed by Jolyon Thomas (Slaves).

Prior to the release of the new EP, we had a chat with them about their music, their influences, playing with Ash and their plans for the future.

When and how was Otherkin born as a band? What influence does the Dublin music scene have on you guys individually and as a band?

We formed in Toronto a few summers back. We were all living there and jamming on a porch to pass the time. We met Rob online when we came home and there you have it. The Dublin music scene is booming but we don’t derive a huge amount of influence from it sonically; there’s not a huge amount of garage rock happening here but there is a diverse range of great music being made. COYBIG!

When I tried to find something about your band’s name I learned about this weird internet phenomenon (people who identify as Otherkin, whatever that means). Presumably, the term comes from fantasy literature. Did you have any of that in mind when you chose the name and if not, why did you pick it?

We picked it just ‘cos we liked the sound of it! We had no idea of the actual concept behind it but we found out quick enough when people who identify as Otherkin started flooding our inbox.

Do you consider yourselves to be other – i.e. different from the current British guitar music scene?

Not entirely. There are a lot of bands coming through from the UK at the minute who are making the kind of racket that we like to make. We feel like that brand of sound is on the upswing again, there’s hope for guitar music yet.

I hear a lot of The Strokes and The Hives in your music. What other
influences do you have?

We’re big fans of guitar bands old and new, it’s hard to say where we derive influence from directly but some artists that would be constantly on the Otherkin tour playlist include The Clash, Thee Oh Sees, QOTSA and Weezer.

You’ve got a new EP coming out. What can we expect from the new songs?

Energy, hooks and positive vibes. We just wanna soundtrack a good time and these songs fit the bill nicely. Our most recent single ‘Yeah, I Know’ has a bit more of a menacing edge but when it explodes in the bridge people just lose it at the live shows. It’s always a highlight.

Video: Otherkin – I Was Born

What inspires you when writing songs and how does your songwriting process work?

Every member of Otherkin writes, so we all bring ideas to the table. A lot of the time it’s just a chorus or intro that’s brought in and we all write the rest of the song together. It’s a really fun process and we just aim to write songs we’d love to hear ourselves.

Have you played any of the new songs live yet and if so, have you made any significant changes to them when you recorded them?

We’ve played everything off The New Vice for a while, some of the songs have changed in form, with elongated breakdowns or outros. We like to keep things fresh and ensure our live show plays off the energy of the audience; therefore songs can change instantaneously depending on the night.

You recently supported Ash on their UK dates. What was it like touring with them?

It was great. We played our first show in Northern Ireland to 600 Ash fans, and there’s good crossover between us sonically so the crowd was really receptive.

You have also played your first shows outside the UK last year and you’ve got a festival date in Berlin coming up this summer. What is it like for you to play outside the UK? Are the crowds any different?

Yeah, we’ve started playing our first shows on the continent and we’re having a blast. The crowds are mega, they just really get into live music and they respond to new music in a way we haven’t seen before. We played our first show in Amsterdam a few months back and people were crowdsurfing on stage. Nuts.

What’s your all time favourite song?

Ah man, that’s a tough call. It depends on the mood, depends on the band member, it depends on everything! I’d say our most played song in the tour van is Time to Dance by the Shoes. That one always gets the blood up.

The New Vice EP is available now from all digital retailers. Otherkin will play a run of festival shows across Europe and the UK this summer and full. Tour dates can be found below. 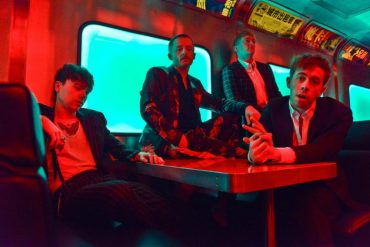