It’s been almost 4 years since Courteeners released their last album, Mapping The Rendezvous, and this week the band are set to release their new album, More.Again.Forever. Yet does it live up to the standard of their previous albums, or does More.Again.Forever miss the mark?

Heart Attack opens the album, fast-paced with a catchy chorus and different from the Courteeners tracks that we’ve seen on previous albums. Heart Attack was added to the setlist on the December shows at London’s Olympia Theatre and Manchester Arena and has become a crowd pleaser, yet sees Courteeners move in a new direction.

The lead single, Heavy Jacket is the albums second track, another highlight of Courteeners current live set. A stomping number which is destined to sound even better at festivals in the coming months.

Next up is the one that fans have been waiting for Hanging Off Your Cloud, the song has had a spot on Courteeners setlist since the bands winter tour in 2018, with fans constantly tweeting lead singer Liam Fray when is Cloud being released?. It doesn’t disappoint, Hanging Off Your Cloud is a vulnerable track which sees the introduction of an orchestra which further adds to its beauty. If you’re going to listen to any track from this album, let it be this one.

Take It On The Chin is very reminiscent of Courteeners previous releases and is destined to be a fan favourite. Optimistic in its message, Take It On The Chin reminds listeners that (eventually) everything will be fine. If Courteeners are to add this track to their setlist, fans will be in the palm of their hands with this high energy, positive number.

Closing the album is Is Heaven Even Worth It?, another track which sees Liam Fray at his most vulnerable, a truly stunning track which reintroduces the orchestra which was used within Hanging Off Your Cloud. Calm, enabling fans to reflect on the tracks before it, a perfect album closer.

More.Again.Forever sees Courteeners depart from their lad rock sound and it’s a change to be received with open arms. With a balance between high energy bangers and stripped back tracks, Courteeners have found themselves with More.Again.Forever – potentially the best album in their discography. 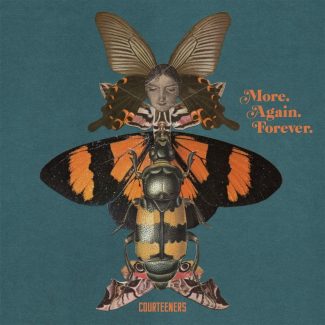