The eponymously titled debut EP from lo-fi indie rockers Cagework is the latest release from Physical Education Recordings, the independent run by Jamie Johnston and Justin Lockey of Editors. In little more than fifteen minutes, the London based three-piece rattle through seven heartfelt songs which tap into elements of punk, art rock and their own take on punk.

Originally started as little more than scraps of songs written whilst guitarist and singer Samuel Bedford was deeply involved with various groups, it could hardly even be called a solo project as he was more focused on the bands he was in at the time whilst still in his hometown of Cornwall. I caught up with Sam at a showcase gig of the new material at Rough Trade Nottingham where he told me about the origins of Cagework:

I was doing other stuff in other bands and it was kinda of just a thing to do on the side. Songs that weren’t working for that band I was in. Just doing other stuff as well as living in Cornwall two or three years ago.

And then I moved to London two years ago and that band I was in stopped and I was like “Wow. I’ll just use the Cagework stuff and start something else with it”. And then James (Luxton) the drummer, he’s from Bristol and I used to live there and we have a lot of mutual friends. He got in touch, he really liked my old band and he really wanted to play in this one and he’s really amazing.

After recruiting Russell Marshall on bass, Cagework became Sam’s main focus and the trio began fleshing out the songs and recording them in their very own basement studio.

Justin Lockey (of Editors fame) started Physical Education Recordings after the release of the first Minor Victories album; a shoegaze / post rock supergroup Minor Victories which boasts Rachel Goswell of Slowdive, Stuart Braithwaite from Mogwai and his brother James as its members . Following on from this stunning record, Lockey has used the label he runs with Jamie Johnston as an outlet for his considerable creative powers. In the past year he has again teamed up with his brother James, the sadly departed Scott Hutchinson plus Grant Scott Hutchinson of beloved band Frightened Rabbit to form mastersystem and create a single critically acclaimed album plus Lights On Moscow; Lockey’s secret band with Lanterns On The Lake’s Hazel Wilde. Having already proven their pedigree with such a high-quality output, many are eager to see what Phys Ed will release next and the excitement is high after Johnston and Lockey promised big things for 2019.

Cagework were first brought to the attention of Justin Lockey by mutual friend and PR manager Nick Carling, having already completed the EP and being poised ready to self-release it. Lockey was quick to contact the band with the aim to release it, but only on the condition they recorded the whole thing again with him at his studio. Sam was initially reluctant but was brought round by the promise of excellent facilities and Lockey’s proven track record in production;

I did the whole thing and then they were like “Oh we really want to do this record but can you record is again with us?” but I was like “Fuck no man I’ve just spent months on it. I don’t want to go do it again!” But I got persuaded.

It was the right decision as Cagework sound had since evolved with the involvement of Luxton and Marshall and their live performances together to give them a harder edge and rougher feel. Starting again allowed them to incorporate this new direction into the EP and create two of their best tracks;

‘Wilson’ was done about a week before we recorded and I was like “We need to make it a bit different, put another song in”. The pop-ier songs are like quite old, they’re like three years old as I started it as a solo thing. So, we thought we’ve got to put a more punkier one in that’s more how we actually are as a band so we put ‘Wilson’ in at the end. Because ‘Modesty’ was one we’d written since I’d done those ones as well. And they were like “We really like this. Can we put it out?

Given the sheer driving force of first track and powerful single Wilson, it would be hard to imagine the record starting any other way and it is a surprise that the song came so late in the day. Yeah sure there’s a fair bit of lyrical repetition, but that just packs more punch to the song.

Eileen has a drunken rolling quality which feels like a jovial sing-a-long that begs to be played live and ‘23’ is romantic malaise accompanied with a fantastically dexterous riff. The record maybe loses pace and direction during Listen Elsewhere which does feel a bit like a filler track, but that is quickly recovered with Modesty which rapidly gets things back on track with a 92 second long headbanger which is proving to be their most popular track according to the stats on Spotify. Knowing that this was one of the latest songs to be written, it really does indicate fantastic things to come.

Trust is just so damn catchy and easily my favourite track. The toe tapping rhythm, classic loudquietloud dynamic and the subtle addition of cello laying just underneath the chorus just makes it so perfect.

The EP ends on the obligatory quiet and wistful final track Valuables. Bitter and resentful, the song is full of contempt and its simple structure allows for the real anger to bleed through in an understated way. I’m not convinced by the double tracking of the vocals as it breaks the tension and loses some of that direct connection with the listener. But I guess the thinking was it might be a bit monotonous if they didn’t create some sort of variable in a very basic track.

Cagework have succeeded in creating seven tracks which references various genres, including the hang wringing of early emo, the experimentation of indie rock and muscle of post-hardcore without settling comfortable in anyone one neat little box to etch out a space of their own. So, it is very exciting to be told that the three are already looking towards their next release which is expected to be their first full length album which Bedford describes as “A lot more weird. A bit more riffy. It’s more like a Slint record, the next thing” and expects to begin recording in September with the aim to have it out by Spring. While we wait for them to complete the inaugural LP, I am certainly going to be playing this EP a hell of a lot! 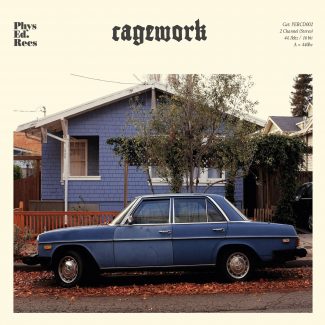