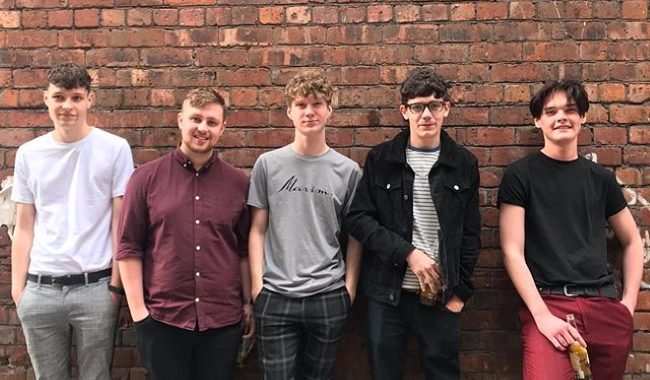 Instantly catchy from the first note to the last, Baltikk are consistently putting their stamp on modern indie rock. Despite only forming in October 2017 the Mancunian rockers are proving that age is just a number. Furthermore, the members may have their primary strengths within the band, with Harry Edwards on vocals, Sam Sumner on the drums, bassist Daniel Littlemore and guitarists Joe Ball and Kyle Bebb, but most of the members are multi-talented which explains how they seem to flow so easily together.

The band affectionately refer to new single Walk Away as the ‘synth one’, as it’s a trippy culmination of the growth the band has undertaken. Their first single Darling released earlier this year was immediately a certified banger, with the same producers who also works with The Night Café.

From the eery start, the introduction of one of the catchiest melodies to date, and the stirring first line “lipstick stains on the window”, we instantly know we have more on our hands than the usual reflective nature of a tune reminiscing about a past love. Edwards voice blends perfectly with the melody and further proves their talent as a collective, rather than separating them into frontman singer and band. The track builds up to a climax with the lyrics dripping with emotion, “And I remember those days/ we were chilling in the river”. Before the chorus can get underway a dramatic pause leaves us wanting more as it carries into “Don’t you walk away I just want to see your face again/ our love has gone astray”.

The artwork for Walk Away deserves a special mention. Designed by their friend and fellow budding creative Match Sienkiewicz, it does not embody the fallen romance aspect of the track, but it also serves as further evidence that this band is paving the way for future talents to thrive.

Overall, if Baltikk hasn’t made it onto your radar yet be sure to listen to them and keep up with them on social media. For the band who never sleeps, another release should be underway this Autumn.

Furthermore, be sure to catch them supporting Pacific at Night People, Manchester on the 7th of September and at their own headline gig at Jimmy’s on the 22nd of October. Their music is truly done justice when viewed live, and every performance is sure to be unmissable judging by their recent repertoire.