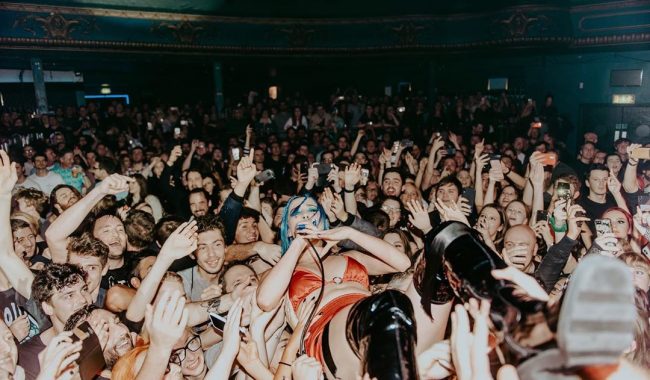 With riffs reminiscent of the Yeah Yeah Yeah’s, the four members of Yonaka came together during their college days and soon grew a reputation for wild live shows. Coming to the end of their headline tour and nearly two years of being on the road, the pace has not dropped for the Brighton quartet as they take to the stage of Electric Brixton on a cold November night.

Storming onto the stage amongst crashing riffs and strobe lights, the band are not afraid to show the level of noise they can effortlessly make. Amidst guitarist George Edwards, bassist Alex Crosby and drummer Robert Mason strides the slight yet powerful figure of lead singer Theresa Jarvis adorned in a sexy boxing outfit.

She cuts an intimidating figure on stage, looking slightly like the love child of Hayley Williams from Paramore and Harley Quinn. Her ability as a lead singer should not be underestimated however as her intense stage presence captives the audience; all the while her vocals dominate over the raucous noise her bandmates are making.

No matter how talented Jarvis is, it is the power of Yonaka’s riffs which are the main reason to see this band live. Powerful is an understatement, those bass lines will reverberate into your soul and back out again.

The combination of this energizes the crowd into a bouncing sea of bodies weak to Jarvis’s every demand. At her instance mosh pits open up, beer goes flying and lighters come out (for a customary slow song). Meanwhile guitarist Edwards is not going to be stood up, climbing up the rigging, leaping into the crowd and across the stage, the chemistry between him and Jarvis is palpable.

If you asked me to describe Yonaka in one word; there’s no doubt that it would be relentless. With more dates lined up for 2020, and a loyal fanbase behind them the future seems good for Yonaka. I would strongly urge you to go and see them whilst they’re still playing smaller venues, you won’t regret it.