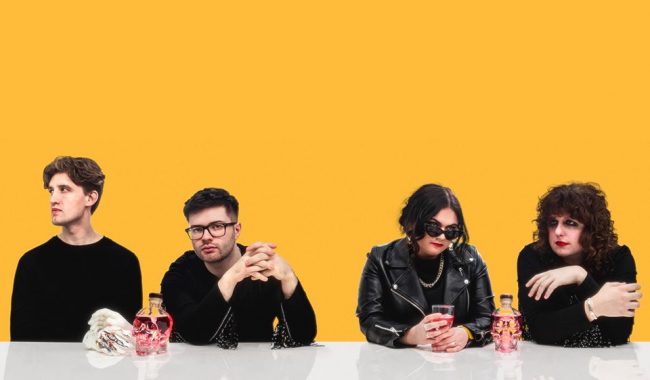 The Vegan Leather is the art-pop quintet from Paisley in the Lowlands whose band members include Duncan Carswell (Drums), Gianluca Bernacchi (Vocals/Guitar/Synths), Marie Collins (Vocals/Guitar) and Matt McGoldrick (Bass). Whilst the alternative airwaves currently seem to currently be saturated with the more brutal so-called ‘visceral’ side of post punk, The Vegan Leather opt towards a reinvention of the new wave end of the spectrum in keeping with the Scottish bands of the late 70’s / early 80’s credited with kick-starting the indie movement. Pithy lyrics meet punchy beats, perfect for filling the indie disco floor and giving you a wry smile while you swing your hips.

October sees the release of their LP Poor Girls / Broken Boys. Produced by non-other than Paul Savage and recorded at the famed Chem19 studio, their first full length record is a stunning collection of eleven catchy tunes bringing together pop, electronica and bit of indie rock sure to become the record you play to bring on the good times. It includes singles French Exit which explores the rising panic of social anxiety and The Hit that explores the pressures of artistic conformity to succeed as a band.

Indie Is Not A Genre spoke to Gian about their debut album, living life in parallel with the mainstream and the challenges of being a new band on the rise.

The Vegan Leather – The Hit

How did The Vegan Leather first get started?

We got together in our hometown of Paisley at a young age and began to play in different bands with each other. A few dubstep and folk bands later and TVL were born! Paisley is famous for its textile industry and has always felt like a place that has encouraged arts and culture. I guess for us, having music and community has been a real lifeline in terms of battling all the issues we’re talking about in the album – mental health, pressure, mundanity, routine, anxiety, image etc.

How long have you been working on your new album ‘Poor Girls / Broken Boys’ and what can you tell us about the themes found on the record?

A select few of the songs on the record were written as far back as 2012, but the majority are songs we’ve been working on from the last 2 years or so. We started off writing in each other’s bedrooms and in the backs of cars – one song from the album starts off “In the back seat of your car”. We were fortunate enough to be in a position to take our album into Chem19 studios and work with the incredible Paul Savage.

To sum up the album in one phrase, I think it would be “learning to exist” (taken from The Hit) .

The album discusses the ways in which people are sometimes broken down by different situations or pressures. The songs are a testament to how people learn to deal with hardships and tell stories of how we either succumb or resist to the world we live in.

These kinds of themes are recurrent throughout the album, but we hope it gives off a sense of hope to people rather than discouragement.

The song you mentioned, ‘The Hit’, appears to deal with the pressure of making that smash hit single – do you think it’s still important to breakthrough into the mainstream and attain chart success?

We definitely don’t think it’s important to break through to the ‘mainstream’ because it’s difficult to know what that means and who sets the standards of ‘success’. We think it’s really crucial, especially in terms of mental health, not to measure yourself on an arbitrary scale. Instead, we think it’s better to measure your own success.

We’ve written our first album, and for us personally, that’s incredible and we’re totally delighted. In that way – we feel successful. Obviously it’s great to set goals and aim high, but if you’re constantly chasing the notion of ‘success’, then you’ll never be happy.

You have spoken about the importance of subversion and that is noticeable in the way ‘hit’ has a dual meaning in terms of a successful song or a physical impact – do you feel a need to instigate change through your music?

I don’t think we write songs with the direct intention of instilling ‘change’, but we do feel it’s important for people to feel part of something and to find comfort in lyrics – even if that means extracting your own meanings.

Music has been massive for us in terms of feeling part of something, or feeling less hopeless, and so we hope the songs connect with people rather than change their minds about something. Going back to thinking about “community” and our hometown, we hope the album can resonate with people and bring them a sense of belonging.

When was the last time anyone in the band actually did hit someone? (If ever!)

We’re a band of pacifists, we tend to deal with our anger through the forgotten art of riffs.

Many young songwriters and bands are finding it tougher than ever, having to work to live still despite being signed and often dropped because they don’t immediately make a tremendous amount of money for their label. Have you experienced similar difficulties?

We haven’t experienced any pressure in terms of being dropped from a label or anything like that but we always talk about how difficult it is to have the space to be creative whilst also having to work. It’s just practical things like trying to arrange time off at the same time to rehearse or write together.

We watched a documentary called “Lost In France” that follows the rise of the Scottish Indie scene in the 90s. It featured a lot of bands that came through Chem19 (the studio we recorded our album in) and a lot of them were talking about the increasing pressures on musicians today. It’s things like the increased cost of living, and how the digital direction of music has made it a lot harder for artists to be able to have the freedom to create without worrying about money. This is definitely something that we notice, and can become frustrated over. It does however make you more determined to not let creativity become lost under pressures of money and the stresses of everyday life.

There is a subversive element to your video by moving away from the pristine hi-def that many acts currently seem to obsess over towards a more lo-fi aesthetic which appears to deliberately obscure the band – do you feel there is currently too much emphasis on creating a highly polished visual element rather than concentrate on the music?

We feel that our strength has always been in our music and live performance. Image is obviously really important, but we’ve always been attracted to the obscure, and doing things DIY. We got a green screen, borrowed Marie’s work office space, made some animations on our laptops, and got our lovely pals at humble film productions on board to help with the filming. We think it’s important to remain authentic and the lo-fi approach is a way to let our audience know that we’re 4 pals from Paisley making music and not morphing into unapproachable figures behind something super polished.

What is next for The Vegan Leather?