Kent garage rock trio The Bay Rays today release a new video for their current single Satisfaction. The new single is also the title track to their forthcoming debut EP Satisfaction that will be released on 29th March via the band’s own label East Wing Records. To celebrate the EP’s release, The Bay Rays will play their debut London headline show at Sebright Arms on release day.

It’s easy enough to guess what Satisfaction is about but here’s what the band had to say about it:

it’s about wanting to escape your social anxieties. You break down barriers, but then you don’t like the person you’re becoming

Made up from three members in their mid-twenties – lead singer and guitarist Harry Nicoll, bassist Anthus Davis, and drummer Maxwell Oakley – The Bay Rays have been playing together in various outfits since their early teenage years, when they met at school in Kent.

After touring with Estrons and Slaves, and headlining the BBC Introducing stage at Glastonbury, the band have a whole host of festival appearances lined up this summer, including The Great Escape, Live at Leeds, City Sound Project and Hit the North, following their London headline show at Sebright Arms on the 29th March. 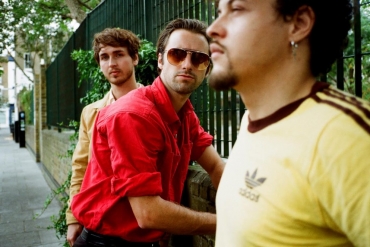