From busking around the streets of Tunbridge Wells to gaining over 190,000 streams, Sam and Sounds has surged in popularity and has just released his fourth single In Time, She’s Mine, taken from his upcoming album scheduled for release this October. Listen below.

This upbeat, dancey, pop tune about building up the confidence to talk to a girl is painted with fuzzy electric guitar lines, a catchy chorus, and dreamy pop synths, the perfect track to make the most of the remaining few days of the British summer.

Speaking about the track Sam said:

I wanted to go back in time a bit and write a song about the time before my girlfriend and I became a thing and I was in the chasing phase. It was a funny time, like, not necessarily knowing what to say or saying stupid things, but still having confidence that ‘in time, she’s mine.

The lockdown is what encouraged Sam to release his music, previously focussing on busking, something that, of course, wasn’t possible in the midst of a global pandemic that restricted the entire country to their houses. Sam and Sounds has already solidified himself as a promising newcomer with these four singles, it’ll be interesting to see how his debut will sound and if it will launch him into stardom. 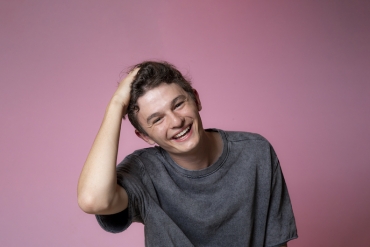