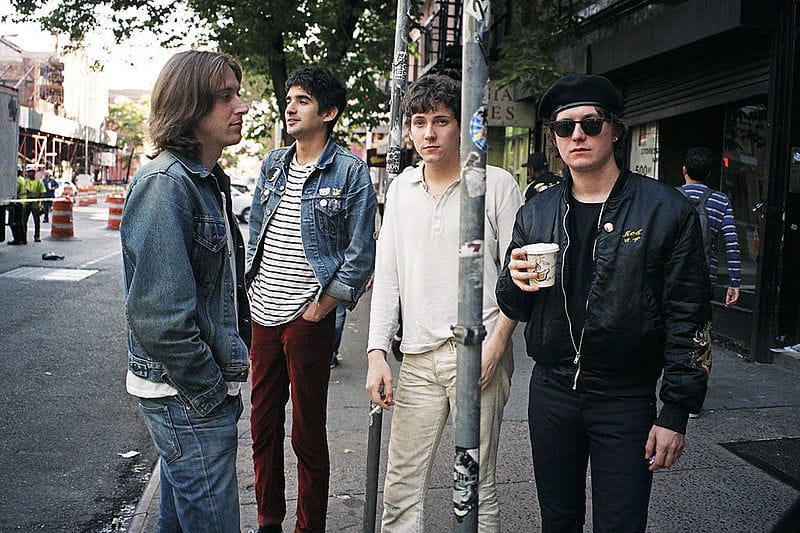 As a music lover, there’s a certain satisfaction to seeing a band live at a fairly intimate venue on a wet Monday night and knowing they’re going to be big. Watching Public Access TV open for Hinds at Leeds’ Brudenell Social Club, is one of the most satisfying gigs I’ve been to in a long time.

It’s fair to say the New Yorkers have played to bigger crowds, but the enthusiasm and energy they inject in to the 2000’s-era garage rock masterclass which they exhibit would befit a much grander setting than this. John Eatherly, guitarist and lead singer, is a ready-made star down to the last detail. His every movement and mannerism feels incredibly authentic and natural as he bounces around stage.

If Eatherly is star material,the rest of his band are clearly cut from the same cloth; they operate with the fluidity and ease of a band who’ve been playing shows like this together for twenty years rather than two. Backing vocals are provided by the whole band and really add a depth to the sound that so many bands are sorely missing. Bassist Max Peebles’ eyes rarely leave Eatherly’s throughout the set, only to look out in to the crowd and watch the throng of students and cool kids get progressively more and more in to Public Access TV’s incredibly infectious brand of indie rock ‘n’ roll.

Despite only having a couple of EPs under their belt to draw from, the four-piece rattle through a set jam-packed with future classics. The opening track is one of only two throughout the night which could be considered “lesser known” and this, coupled with the somewhat tame Leodensian crowd makes for a slightly shaky start. After this initial stumble though, the band tear through each track with a fury and an edge which you won’t hear on any of their recordings and in doing so, put aside that fear which comes with a band like Public Access TV, whose early singles have been so strong, that maybe their live show will let them down.

Second track tonight and latest single On Location sounds particularly better for being a bit rougher around the edges, as frontman Eatherly growls the chorus line over thunderous accompaniment. By the time they reach the middle of the set and fan favourite In Love & Alone, everyone in the crowd, (even those who clearly didn’t know the band to begin with) is bouncing and singing along with what words they can pick up on along the way.

There’s one word that I keep wanting to write, in relation to this performance; infectious. There are plenty of people crammed in to Brudenell tonight who clearly didn’t know the band when they got here, but by the time PATV finish off their set with last year’s Patti Peru there isn’t a single person in this room who isn’t swaying, nodding, bouncing, jumping, singing, shouting or tapping along to their beat.