Skip to content
Home > Reviews > Of Montreal – Ur Fun

Of Montreal’s new album UR FUN is set to drop January 17th via Polyvinyl Records. Kevin Barnes pours his love life into his music, making this album just as honest as the last. He pairs modern, relatable lyrics with a fun synth sound reminiscent of Cindy Lauper and Madonna. The tracks bounce and bubble with 80s movie montage quality. But for the real nerds, Barnes pulls from culture, giving us references from 80s sci-fi movies, Italian horror films, and French literature. But I won’t spoil it, listening is part of this synth-rock adventure.

The first track, Peace to All Freaks is a joyous ode to resistance. Barnes sings “The cops were fucking up against the wall/But our hearts were singing peace to all freaks/You cannot spin us ’round your hate will end/We know the universe must express itself as awful people too /So we really just feel sad for you.” Maybe you’ll find the beginnings of a better world on this album.

Track five, You’ve Had Me Everywhere, is a love song for every wedding singer’s cover list. It’s upbeat, simple, and oh so fun to sing along to. It is also very autobiographical as it reflects upon Barnes’ real-life relationship with Christina Schneider from the band Locate S,1. Track seven, Don’t Let Me Die in America, opens with strong guitar and a clear distaste for the States. He repeats “I don’t even wanna haunt this place” and I think most of us can agree. The track also contains probably the best line in all of  he asks have I lost my country because I have no love for piggy-piggy fascists? Of Montreal gets straight to the real heart of politics.

Of Montreal’s UR FUN is an unexpected, totally refreshing take on life, politics, and relationships with the sonic help of electro-rock, radiant synth, and all the best to come out of the 80s. 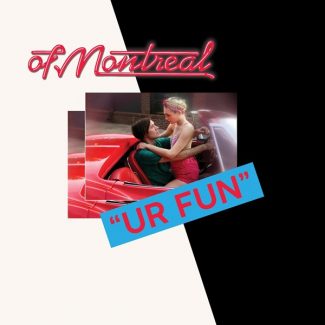 Of Montreal - Ur Fun