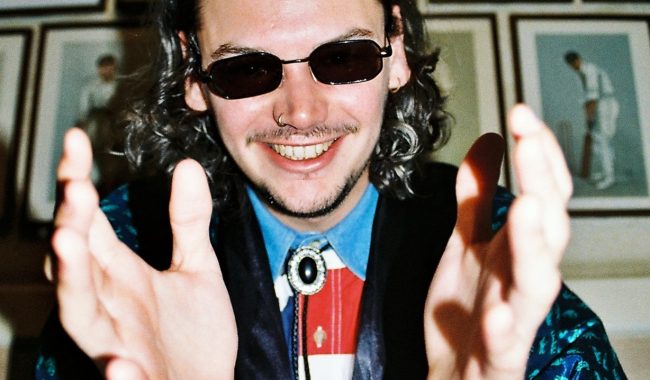 Sit up and take notice: Lazarus Kane doesn’t mess about. Catapulting to your airwaves all the way from the US, his disco debut ‘Narcissus’ is an instant classic. This, coupled with a reputation for incredible live shows, has earned him a well-deserved spot at The Great Escape Festival 2020. Ahead of his First Fifty show, he chats to us about narcissism, salsa dancing, and Damien Hirst.

Grace: You’ve kind of come out of nowhere and dropped this genre-bending pop-funk banger, ‘Narcissus’. Why did you choose to write a song about narcissism, modern life and terrible people?

Lazarus Kane: Thank you. They say “write what you know”. So I did it. I am narcissistic, I am currently alive at the utmost point of modernity, that is, to say, now, and I am a terrible person. Three for three. Goldrush!

Grace: I read that you wanted to record it all in one take. Why?

LK: I had a salsa dancing class with Anton du Beke that evening, so I didn’t really have time to hang around the joint. Plus it is good to become one with the recording process. Do not septette yourself, you must become the sound wave. Move with it, as if you were a Spanish galleon on the high seas.

Grace: If you could only listen to one artist or band over and over again for the rest of your life, who would it be?

Grace: Describe your sound in 3 words.

Grace: What was the first record you ever bought?

LK: This is Muzak! vol.11. Although, I’m not sure I actually wanted to buy it, or I was psychologically manipulated into buying it in the mall. Who knows?

Grace: How different is the scene in the UK to the US?

LK: The UK scene is refreshingly much heavier indebted to gastropubs. FINALLY.

Grace: Narcissus is a brilliant debut. What else can we expect to hear from you?

LK: Thank you, I really appreciate that. I’ve got an album of Gregorian chants coming out early next year. It’s a departure, sure, but working with Rick Ruben on it really was a ride.