The Portland trio of sisters that make up the group Joseph are ready to release their first album in three years, Good Luck, Kid, via ATO records. Under the production of Christian “Leggy” Langdon, Natalie Schepman, Allison Closner, and Meegan Closner sing together like angels that could only be connected by blood. They have a sound like Sia, if she were driven by guitars and sisterly voices.

The album’s namesake song Good Luck, Kid holds that blurry, unstable feeling of adulthood. We’re thrown into this mess that was already here, we’re lost and uncertain, but we’re expected to fake our way through. They sing “you’re used to looking around to see/how everybody else is doing it/how it seems like we’re all losing it.” Does anyone really know what they’re doing? We live in a time when we need productive, world-fixing leadership but we are drawing the map ourselves.

Joseph’s opening song, Fighter, is a sonic exploration of a time when the band almost broke up. They sit the song on top of this album, like a triumphant new beginning after tough times. Green Eyes stands out on this album as a song you could easily, and dramatically sing at the top of your lungs. It is a cathartic lift and fall. Shivers carries the harmonies that run down your spine.

Joseph’s songs feel as if they’re bursting out and filling the room with every kind of love. These sisters know each other well, and this undeniable life-created connection is apparent throughout Good Luck, Kid. 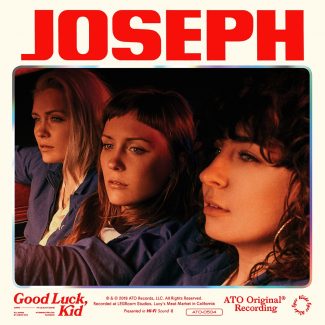