I first stumbled across Jemma Freeman and The Cosmic Something right at the beginning of this year when I caught them at Rockaway Beach back in January. While I’d not heard of them before (but had had previously been introduced to Freeman’s previous psyche outfit Landshapes), I was immediately struck at how fierce their performance was and just how much energy the three-piece were able to summon on a wet Sunday afternoon as they tore through a wildly chaotic set that encompassed post punk and indie pop ending with Freeman shoulder barging the bassist and the pair collapsing in a heap together.

While it’s always fun to see a band self-destruct on stage, it was more important that the songs matched the attitude and as Freeman threw little cards of MP3 codes into the air, I was amongst the first stumbling on the ground to pick one up and was enormously interested to hear what they would do next. Turns out, that would be to sign to Trapped Animal Records for the release of the standalone single Find A Place and now their debut album Oh Really, What’s That Then?.

Their first full length doesn’t mess about and immediately kicks off with rampaging garage rock single Helen Is A Reptile. It has benefitted from getting some prominent airplay from Steve Lamacq on his BBC 6 Music show plus Radio X’s John Kennedy and it’s easy to see why; squealing lead guitar and catchy hooks are met by lyrics that could read like an excerpt from a William Burroughs novel. But don’t blink, because it’s just over 2 minutes long and you’ll miss the stomper!

Keeping the momentum set to full steam ahead, it is immediately followed by second single Keytar (I Was Busy) which sees the six string put down in place of the titular instrument to create a truly plush glam synth pop banger. The mutation of the debut album continues as Hard Times strays into Fleetwood Mac territory whilst Black Rain is an atmospheric and evocative blues rock masterpiece which really shows off Freeman’s emotional depth. Clearly having felt like they hadn’t touched upon enough genres, ‘What’s On Your Mind? is creepy psyche and Vines even summons shades of baroque pop.

Side two and yet again you could have mistaken for thinking you’ve flipped the wrong record over as Kopenhagen has pastoral folk flavours flowing through its veins and is immediately followed by a leftfield turn to spikey post punk on Heaven On A Plate which feels like it could have been written in cahoots with Iggy and Bowie during their Berlin days. The welcome melodrama goes into overdrive with spellbinding song Count To Ten and spills over in Distant Places that pinches lyrics from Michael Jackson’s Smooth Criminal, albeit sung at a karaoke by Kate Bush and concludes on a big finish with Tasteless. While the three last songs veer erratically, though not unpleasantly so, it’s almost ironic it’s the only time on the record that feels like the subsequent tracks actually feel like they’re from the same act!

Discovering that Oh Really, What’s That Then? was recorded over a year at the Marketstall Recording studio in South London, the leap in sound and style makes sense as Freeman has had the time to really delve into each genre properly rather than have to rally through to completion in one specific headspace. The danger, of course, is that it could become rambling, disjointed and ultimately fail as an album. Owing to their excellent song writing skills and huge personality, the first outing of solo project Jemma Freeman and The Cosmic Something is an excellent listen which benefits from its constant evolution and shows Freeman is ready and willing to delve down any sonic avenue that takes their fancy. 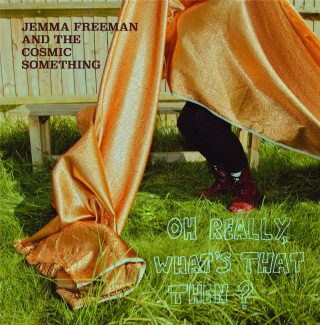 Jemma Freeman and The Cosmic Something - Oh Really, What's That Then?