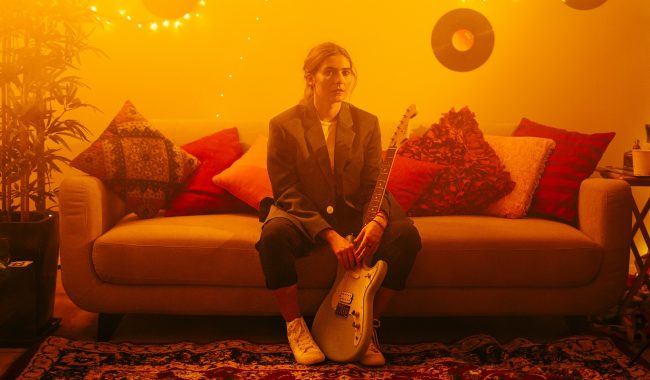 Australian singer-songwriter Hollie Col trades her slow acoustic sound for an upbeat electric one, as her music career veers in a more exciting direction. Listen to Unholy below.

There’s no messing around in her brand new single Unholy, which plunges our ears straight into the action as no intro can be heard. The very beginning only features her charming voice singing “lately you’ve been saying baby I’m falling apart” accompanied by a soft electric guitar, leaning towards her previous music. However, the mood soon changes and a full band can be heard. This full band is a change from her previous songs, and a high level of infectious energy encourages anyone to dance along.

Describing the tune as an “upbeat guitar pop anthem for the hopeless romantics that loved too hard and were left on the sideline”, Unholy highlights vulnerability in relationships. The chorus has a compelling melody line, with lyrics including “I feel your cheekbones digging into my soul”. This is a great example of how Col manages to summarise the weakness that love creates for so many people. An inventive bass line is also used in the second verse to make for an interesting listen, and distinguishes this track from many other typical tunes.

Col has announced her second headline tour around Australia, alongside fourteen shows around the UK and Europe in support of Harrison Storm. To add, the highly anticipated music video for Unholy carries a similar storyline as well as a strong representation of LGBTQ+ relationships, mirroring the previous successful video Let Yourself Down which reached 1.9 million views.

After refreshing her sound, Hollie Col combines her previous songwriting skills with a newfound energy to create the perfect plugged in song Unholy. The single is available digitally as of now.