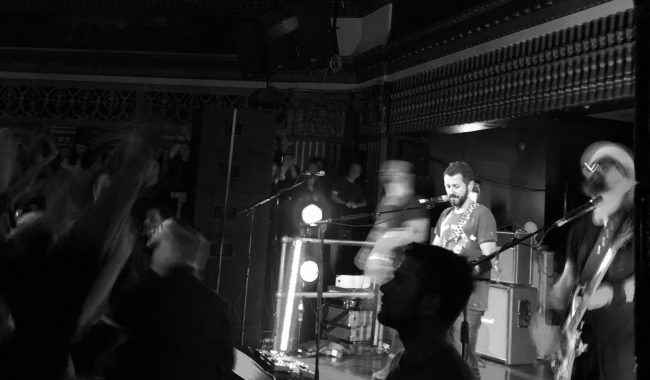 Having featured on the soundtrack to nearly every social event I’ve attended from the age of 10, Feeder are like an old friend to me. Although like any band of their longevity they’ve dipped in and out of popularity, their back catalogue boasts an impressive number of hits.

Pyrzm is just one venue which plays host to Kingston-Upon-Thames under-rated rock scene. Whilst most Londoners are aware of the o2 owned venues spread across the city, one only has to take a short train journey from Waterloo to find the likes of Fall Out Boy, Two Door Cinema Club and Hot Chip playing small intimate shows across the town’s venue.

So it was late on a Thursday, Pyrzm nighclub played host to the late 90’s rockers to launch their 10th studio album Tallulah. With the average age of the crowd pushing above forty, the atmosphere was more peaceful than your usual Thursday night album release show. Maybe this was because Feeder didn’t step onto stage until after most people’s bedtime (mine included!).

However as soon as they took to the stage, the opening notes of Feeling a Moment took the crowd who immediately grew in life. Feeder then proceeded to rattle through their back catalogue and a collective muscle memory gripped the crowd who sang back every word – even for the lesser known songs from more recent albums.

This was not however a band who were simply going through the motions because they’d been paid to be there. You could feel the enjoyment bouncing between singer Grant Thomas and the crowd as 15 years of time peeled away to when Feeder were at their peak and our troubles were different.

Thomas briefly paused to do the new album plug but also to urge everyone to keep buying physical music and support their record stores providing a very important reminder that it’s these smaller shows which feed the big venues.

As their set drew to a close, the crowd were asked to choose between Just a Day and Buck Rogers as the final song. Of course, there was no choice that they weren’t going to play both. As the iconic bassline of Buck Rogers echoed through the venue, the crowd exploded. Plastic pints rained down and parents crowd surfed. Feeder had successfully transported us back to 2004 and it was epic.