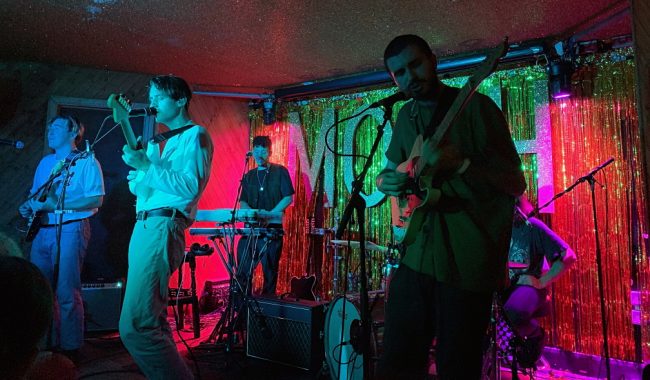 If you’ve ever had the pleasure of seeing a band live at Moth Club, you’ll know that there is nothing like this intimate sparkly venue. Host to some of the biggest names in comedy, drag and music, its made a name for itself as a place to enjoy entertainment with a reasonably priced (for London) beer.

Seeing Far Caspian play at Moth Club was no exception. With shining, happy smiles and a real knack for connecting with their audience, they laugh as a fan expresses their admiration for their bassist, yelling, “We love you Alessio!” & jump into their opening song, Untitled.

Far Caspian’s music has a brilliant calming nature to it. Its versatile – you can bop to it, chill to it, do your dishes to it. Amongst their current discography, there’s no weak number. The soothing elements of their sound are juxtaposed with their live shows – whilst the music is still calming, its played with vibrancy. Harry Jordan (guitar) is the most energetic of the bunch, bouncing from one end of the stage to the other. This is complimented by the joyous but less kinetic demeanour of frontman and creator of this musical project, Joel Johnston. 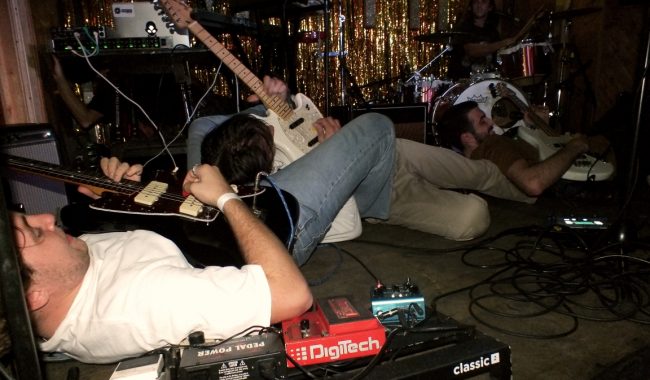 The low lighting in this venue added to the dream-like atmosphere of Far Caspian’s performance, with a packed-out room swaying to Joel’s honeyed tones on Lets Go Outside. The intimacy of the venue adds to the incredible sound quality, and therefore, the overall experience.

The highlights of the show came towards the end of the set – the last two songs, Blue and the absolute banger Finding My Way Home, were met with the most popular reception of the evening, and a fan took three attempts (striking lucky on their third) to crowd surf, jumping off the stage into the audience. Joel’s attention was caught by another fan, leading to him giving them a shout out on stage.

Far Caspian dazzled at Hackneys Moth Club. If you want to see a show that blends soothing melodies and an exciting, lively set, then this is the band for you.