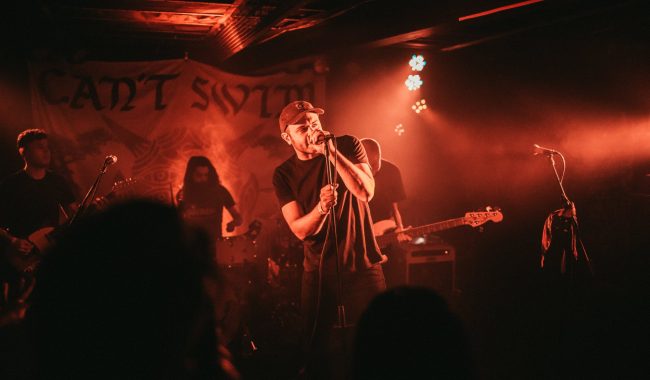 I was offered a couple of tickets to see Can’t Swim at The Fighting Cocks in Kingston presented by Banquet Records. Personally, I can’t say no to free gig tickets and a weeknight pub trip in one of my best local venues. The Cocks reputation precedes it in South London but for those who are unfamiliar; this self-declared rock pub plays host to big label acts amongst the local and unsigned in what can only be described as it’s claustrophobic basement.

So it was, on a Wednesday night we walked through the doors into the small pub space which accompanies the venue. With a support already playing, pub life was continuing as normal and would do so throughout the gig. After a quick pint, and a walk around the back of the bar you suddenly find yourself in the music venue, having a wristband attached to you by a gentleman standing next to a mock-up electric chair (no idea – didn’t want to ask!).

My only prior experience of Can’t Swim was the quick listen I did on Spotify earlier that morning, where I made a swift and sweeping call on adding their most played hit Stranger into my Summer playlist and dismissing the rest as sounding the same (i.e. too heavy for my taste). Having released three EP’s in the last three years, they have a large amount of material to draw from and quickly made their way through the back catalogue including My Queen, Sometimes You Meet The Right People At The Wrong Time and Your Clothes. Speaking about the band, lead singer Chris LoPorto frequently references how the music links to a malevolence he feels about a number of elements in his life. Whether you are a teenager experiencing a struggle for a first time or older and still being governed by these struggles Can’t Swim represent you lyrically.

Walking into that room, as Can’t Swim were well into their first couple of songs the noise was overwhelming. The band were relentless, barely pausing for breath between songs. The crowd mirrored them perfectly as singer and audience both fed off each other’s energies with both literally bouncing off the walls throughout the entire set. One of the most exciting bands currently on the post-punk band, the New Jersey five piece have a massive underground following across the pond in the UK. No better evidence was given than the 30+ people moshing their Wednesday night away in Kingston’s sweatiest watering hole and those who stood on the side-lines.

As the heat almost became too intense, the band swiftly burst into Stranger to close their set. Once again the audience were sent into a harmonious mosh with the band as the venue erupted at the first few lyrics.

In a way I’m the wrong person to comment on this performance purely because this music isn’t what I would choose to listen to, however I cannot fault the show that Can’t Swim put on and the infectious enjoyment that they created. Stranger will firmly stay in my summer playlist whilst my girlfriend is now awaiting their return to British shores for a full tour. I can’t help feeling this won’t be the last time I see Can’t Swim and I’m more than okay with that.

Can’t Swim at The Fighting Cocks