Following on from their critically acclaimed EP In The Reins, Tex-Mex indie rockers Calexico have once again teamed up with Sam Beam AKA indie folk hero Iron & Wine. But this time they have masterfully created their first full length record Years To Burn which is a short but sweet album of eight immaculate songs bringing out the best of the two acts.

Calexico are well known for their many collaborations, having previously teamed up with the likes of fellow Tuscan band Giant Sand, celebrated country singer Victoria Williams and Alt-country star Richard Buckner. However, it was their work with Beam which they had particularly enjoyed as it had sparked a true friendship and they longed to reconnect with the Grammy nominated singer for a more ambitious project than their previous release back in 2005. Each party recognised the strength of the other and longed to reunite to create something special, honest and truly wonderful.

This project had to find the right time. We’re all different people than we were in 2004, and music helps to bridge some of the gaps. For all the things going on in our world and in each of our lives, this connection, this friendship, this love that we have—this album is a vehicle for that bond. It’s a chance to see where we’re at, take stock and be there for our friends.

Recorded during December of 2018 with the aid of producer Matt Ross-Sprang at the legendary Sound Emporium studio, both Calexico and Iron & Wine have managed to create a nuanced album with pushes them both to further greatness at a time they were all ready and eager to work together once more.

Life is hard. Awesome. And scary as shit. But it can lift you up if you let it. These are the things Joey and I write about now. And the title can encapsulate a lot of things. ‘Years to Burn’ could mean you’re cocky, you’ve got it made. Or, our life is ours to burn, to be inspired. Or you’re burned by life, brutalized. It’s an ambiguous title, because life is complicated. Let’s not talk like teenagers about love, desire, pain, ‘cause we’re not teenagers. And that’s not a bad thing.

The mini album kicks off with the upbeat What Heaven’s Left which feels like an unearthed country classic, a hidden gem unearthed in some Nashville vault and brought into the light to shine for all to see for the first time. Midnight Sun, Father Mountain and Follow The Water exhibit both excellent guitar parts and impressive vocals. Outside El Paso takes more of an experimental jazz approach which is an interesting midpoint and serves as a palate cleanser for the second half which is returns to the country.

The album really comes alive on sixth track The Bitter Suite. Lasting over 8 minutes long, it’s definitely the lengthiest track on the album and splits into three parts, with the first half building up of pressure within a relationship as initially depicted by tricky finger picking which builds to a stabbing rising swell with brass accompaniment only to break down into a wistful vocal reflection of what could have been.

Title track Years To Burn is a solemn sing-along reflecting on the fleeting nature of time and the pain that can come with experience and loss. We are left with the last song In Your Own Time which is a jolly final number about welcoming a cherished friend into your home – a theme quite apt for the nature of this collaboration.

Supergroups all too often crash and burn like an Icarian disaster. The pressure of two or more respected figures to become greater than the sum of their parts either explodes into a pompous bloated cloud of hubris, meanders into self-congratulatory naval gazing or simply doesn’t work as the musician’s talents fail to mesh and somehow just cancel each other out.

Fortunately, Years To Burn is certainly not a supergroup and is clearly the loving work of friends and so its warmth radiates throughout. More than simply a curiosity for fans of either Iron & Wine and Calexico (or very easily both!), it’s a fine record for times of reflection and with its storytelling lyrics, can easily transport you to the world contained within each song. Let’s hope they don’t leave it another fourteen years till their next shared record. 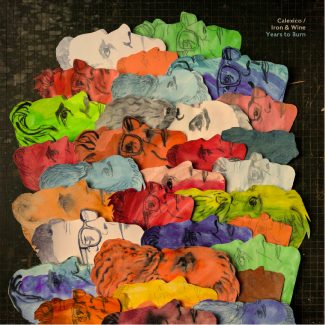