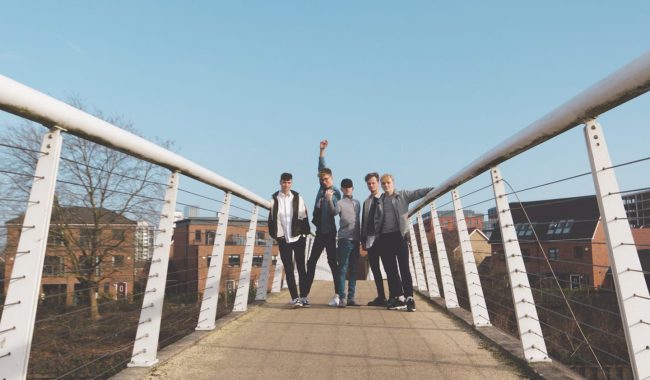 Manchester has often rivalled with London as to which city is the authentic epicentre of the modern music scene. With their latest powerhouse track Boss, Broke Casino is just another example of how Mancunian bands are thriving.

After forming in May 2018, their current line up consists of Ralph McCarthy-Schofield on vocals, drummer Lucas Cook, bassist Sean Savage, lead guitarist Ollie Boon and Sam Wilks on rhythm guitar.

Perhaps due to having five members, it’s easy to see how many influences have shaped this track. Rock, indie and psychedelic elements blend in this ambitious take on modern rock. You would be forgiven for at first believing this track to be repetitive and filled with odd lyrical narrative. For example “And there is a house, a house on a lake/ There was a boy, a boy with constraint.” and “Kids in glass houses with comfortable cake”. However, as you piece together this jigsaw of a track the psychedelic nature becomes more genius than jumbled.

The vocals from McCarthy-Schofield blend beautifully with the melody, and in the second verse with backing vocals from Boon. Throughout the tracks, the drums consistently keep things interesting, and even after the first listen your feet will continue tapping to the beat they’ve created.

With an vintage vinyl cover as the artwork for their single (designed by their talented friend and previous drummer Match Sienkiewicz), they demonstrate perfectly how they are networking with up and coming artists to create a piece of work they can all be proud of. With the current generation, rock isn’t just surviving- its thriving.

From the funky intro fading into the surprise guitar solo at the end, this track is anything but boring and is already garnering interest with radio play from Amazing Radio.

If you’re itching to become part of one of these band’s memorable live shows, they have many upcoming gigs. Catch them at Rose & Monkey, Manchester on the 15th of September for a free-entry acoustic single launch party joined by special guests.

Furthermore, they will also be having their biggest headline show to date at Manchester’s Star & Garter on the 6th of November. Moreover, They will also be appearing at The Venue, Manchester, supporting Ryan Jarvis on the 4th of October, La Scala at Friars Court, Warrington on the 2nd of November, and Good For Gordon at Langtry’s, Crewe on the 16th of November. Be sure to get your tickets soon, as the headline show in particular, is guaranteed to sell out, if their last headliner at Retro, Manchester is anything to go by. All dates and ticket links can be found below.