Having recently announced their sophomore album Antisocialites (out on September 8th via Polyvinyl), Alvvays today share the latest cut from the new record. Titled Dreams Tonite, the track dives deeper into the emotional territory Alvvays are known for.

The album title is derived from the lyrics of Dreams Tonite as frontwoman Molly Rankin sings “In fluorescent light, antisocialites watch a wilting flower.”

To write Antisocialites, Rankin traveled to Toronto Island – working in an abandoned classroom by day and sleeping a few feet from shore at night.

I carried a small PA on the ferry in a wheelbarrow. Every morning I would listen to my favorite records on the beach, then I’d write melodies and record demos in the classroom.

After tracking with keyboardist Kerri MacLellan and bassist Brian Murphy at Kingsize in LA, Rankin and guitarist Alec O’Hanley continued recording and mixing in their Toronto basement.

Across its 10 tracks and 33 minutes the Toronto-based group dive back into the deep-end of reckless romance and altered dates. Ice cream truck jangle collides with prismatic noise pop while Molly Rankin’s wit is refracted through crystalline surf counterpoint.

Alvvays will be embarking this summer on an extensive world tour. All dates can be found below. 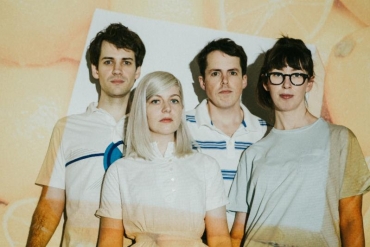