Two years ago, emo veterans The Get Up Kids released their last album. When I saw them on tour they said they wouldn’t make another album for a while but focus on other projects for a while. When I heard that Matt Pryor was working on a new solo album I half expected it to be an acoustic singer-songwriter kind of record. It seemed appropriate as many artists from the emo punk rock and hardcore scene have recently done just that rather successfully (Dave Hause, Chuck Regan, or City and Color). When this didn’t turn out to be the case I was rather relieved. While Wrist Slitter features some of those elements, As Perfect as We’ll Ever Be features just Matt’s vocals and an acoustic guitar, much of it sounds like it was a The Get Up Kids record. This is of course thanks to Matt’s unique vocals but also because the album features a full backing band and most of the songs are composed in mid-tempo and run under 3 minutes.

Opener The House Hears Everything sounds like a perfect Get Up Kids song. Following a rather lengthy brass band(!) intro, Matt’s anguished vocals can be heard over an upbeat pop rock song. Kinda Go To Pieces was previously released as a free download. It keeps up the pace initiated by the opener and features the angsty tongue in cheek lyrics I loved so much about The Get Up Kids.

The title track is more of an intermission really. It’s just over a minute long and consists of just Matt and a banjo. This probably is Matt Pryor at his folkiest. It’s also quite an upbeat and ironic song as Matt remarks: “I was prepared to write a very sad album, a wrist slitter, but this album ended up being the exact opposite of that.”

Before My Tongue Becomes A Sword is yet another highlight. It kicks off with guest vocals by Chris Conley (Saves The Day) and an acoustic guitar before the other instruments kick in and Matt takes over. The keyboards in particular reminded me of the Get Up Kid’s renowned Something To Write Home About record and pretty much everything by Motion City Soundtrack.

Of course, Matt Pryor isn’t the angry kid anymore who wrote Something To Write Home About. He’s an experienced musicians who still loves what he is doing. He seems to be a very down to earth kind of guy too, he still maintains his own Facebook page, shares much of his personal life with his fans and chose to release his album via an independent label rather than going major. On Wrist Slitter, he combines all the elements I love about The Get Up Kids and The New Amsterdams. There’s still the occasional angst moment in some of the faster songs (Kinda Fall To Pieces, Before My Tongue Becomes A Sword) and lyrical depth in the slower ones (So Many Questions, There Is No Us). Pryor is the type of musician that stays true to himself. He doesn’t aim at doing anything other than doing what he loves and he still excels at it. 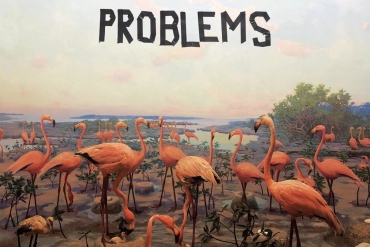 The Get Up Kids – Problems