It has been four years since Bloc Party released their last album Intimacy. After touring Intimacy the band decided to go on indefinite hiatus and many feared this could be the end of Bloc Party. Members of the band focussed on other projects of which Kele’s solo album The Boxer (2010) was the most notable and continued the electronic approach that Intimacy had taken. Kele’s venture into dance music was, and that’s quite a cliché, accompanied by his public coming out.

In 2011 Bloc Party were slowly coming back to life with rumors about Kele’s alleged departure from the band. Expectations were high when the band finally announced they had signed to Frenchkiss and were back together in the study working on a new record. Will Four live up to those expectations?

Initial fan responses were mixed when the album leaked two weeks before its set release. People wrote that Four wasn’t the Bloc Party they knew anymore. People said the same when A Weekend In The City (2007) came out, which was much more radio friendly and less anxious then their debut Silent Alarm (2005). Intimacy took yet another route and had the band experiment with electronic music and turned out to be their worst commercially received album (that said it gained a rating of 69 on metacritic while Weekend only had 65).

I always appreciated all three albums in their own right. It probably helped that I first heard of them when Weekend came out and then went back to Silent Alarm. These changes in style really are one of the things making the band so special and stand out from all those other indie bands who release the same album every year trying to live up to their first.

In a nutshell: Four is an album that should please fans of Silent Alarm the most. It is a lot heavier and more guitar driven than their second and third albums (So He Begins To Lie, Coliseum, We Are Not Good People). Lyrically the album expresses some of that anxiety that I loved so much about their early material as Kele whispers “no one loves you” and then nearly shouts “as much as us” (3×3, which I find hard to listen to) or repeats the words “I’m gonna ruin your life” on Team A (someone’s been watching Pretty Little Liars, I suppose).

Octopus recalls the staccato type lyrics we remember all too well from Helicopter. Octopus, besides its setting in a major key, is actually a song about a school shooting and Kettling reflects on last year’s London riots. The latter is actually one of my favourites, a guitar driven rock song that reminds me of The Smashing Pumpkins in their heyday.

Real Talk is slow and repetitive and probably the weakest song on the album. Day Four shows once more that Bloc Party write rather good ballads (I Still Remember, This Modern Love) – the same applies to Truth. Coliseum opens with a blues rock riff and culminates in heavy guitars and shouts – quite an unusual and yet exciting Bloc Party song – while V.A.L.I.S. takes you back to Weekend days. The Healing is another ballad which unfortunately falls behind the other two.

All in all Bloc Party are definitely back and all members get to play their instruments again. Four is a solid album with forgivable weaknesses for fans old and new. I’ll give it four out of five (pun intended). 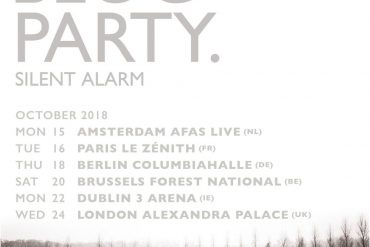