After recently releasing their new single Higher, London pop outfit Eliza And The Bear today share a video for Higher. Since its release in June, Higher has already been used in various TV adverts and has become a festival singalong. Watch below.

The band, now a quartet, have begun working on their music independently. Higher ist heir first release since leaving major label Capitol Records earlier this year and also their first new music since the release of their self-titled debut album.

Higher marks a slight change in sound for Eliza And The Bear. While their previous outputs had a folky vibe underneath the upbeat pop, the new track is a bouncy and funky piece ready to get you on your feet.

We played some shows that made us realise that we were willing to take those odds.

It’s a good thing they did. Originally named after a book of poetry and once talked about in sentences containing the words Flaming Lips and Arcade Fire and Mumford & Sons, Eliza And The Bear started out in 2011. Six years later sees the band aiming for new heights. 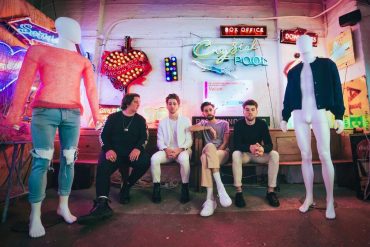 Eliza And The Bear – Higher