Following on from their recent single Your Girlfriend, and a huge headline gig in Stockport Edgeley Park, Blossoms have just announced their third album Foolish Loving Spaces will be released on January 31st 2020. The artwork and tracklisting can be found below.

New album Fooling Loving Spaces follows on from 2018’s Cool Like You and, like its predecessor, was produced by James Skelly (of the The Coral) und Rich Turvey at Parr Street Studios in Liverpool. The band name U2, The Talking Heads and Primal Scream as some of their influences for the new record:

It’s just a pure celebration of love in all of its splendid and baffling guises, toying with the so-called sins of lust and forbidden infatuation … inspired, in ways, by a summer spent listening to Stop Making Sense, The Joshua Tree & Screamadelica

The new album is available on digital and limited edition formats via the band’s official website. 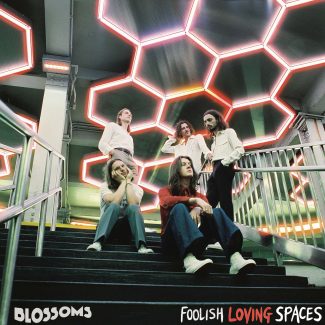 To celebrate the album’s release, the band will embark on a massive UK tour in March 2020, including a date at Manchester Arena, as well as three nights at London’s O2 Forum Kentish Town (all dates below). A pre-sale will be available on Tuesday, October 8th at 9:00 GMT. Sign up here for pre-sale access (no purchase required). General sale will start in Friday, October 11th (tickets here).